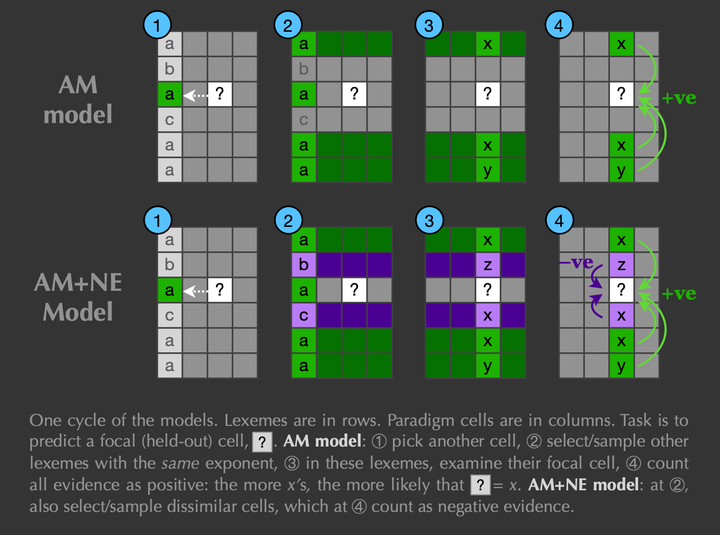 Inflectional classes are a ‘morphomic’ morphological-organisational structure, mediating the mapping between content and form in inflectional systems. In natural language, they are common, productive, psychologically real for speakers (Enger 2014, Maiden 2018), and limit the complexity of the inflectional system by increasing the systematicity of exponent distribution (cf. Carstairs-McCarthy 2010, Round 2015, Blevins 2016). We contribute to ongoing debate over the dynamics that could lead to inflectional class structure (Maiden 2018, Carstairs-McCarthy 2010), by identifying a key evolutionary ingredient: change based on dissimilarity. Since attraction-only models (in which lexemes only grow more similar to each other) inevitably remove all variation, they cannot evolve the stable, structured diversity characteristic of inflectional systems; by contrast, models with both an attraction and repulsion dynamic enable stable, morphome-like structure to emerge consistently.

A model implementing a simple paradigm cell filling task (Ackerman, Blevins & Malouf 2009), is described in Ackerman and Malouf (2015) and illustrated in Figure 1. Within this attraction-only model, lexemes only ever change to be more like others. The core dynamic is one of preferential attraction towards exponents that are already more frequent than their competitors, ensuring that all lexemes eventually converge on a single class. Thus, the model exhibits self-organisation, but only of a radically homogenising kind. We investigated a family of minimally different dynamics, introducing modulable parameters for the paradigm cell filling task: prediction based on multiple forms (Stump & Finkel 2013, Bonami & Beniamine 2016); frequency weighting (Blevins, Milin et al 2016); and a repulsion dynamic, by which already dissimilar lexemes can increase in dissimilarity.